Espionage during travel is still a problem and is growing again


Espionage during travel is still a problem and possibly growing again. Here is one incident and some tips on preventing it from happening to you.

Late in 2012 I checked into a hotel that I had once used in the past. After I had settled in, I used my old RF signal detector to do a quick scan of the room. As usual, it took me a minute to get it calibrated to the area I was in: when I moved around the room I had a few chirps near the tv, which I turned off after checking it closer with the detector. When I continued, it chirped a few more times. Probably a police car or cab using a high powered radio. Once that cleared, I kept going.

When I sat down, I saw a little spike in the LED’s, but no chirps. I bent down near the headboard, and the device chirped once. I got down on my knees and checked the calibration again, making the detector a little more sensitive. I moved back to the headboard and got a fairly constant chirp from the device. I pulled the mattress and springs over to the side, and found a small transmitter taped to the frame of the bed.

After taking some photos I took the device out. It looked pretty simple, so I turned on the clock radio in the room and, holding the device close, I tuned through the FM radio spectrum. I found the device at around 100 M in the FM band. It was a very small signal, which usually meant that the battery was almost dead. I made the decision to not investigate any further, as it was pretty obvious it was not targeted at me, since I had not even made a reservation.

I thought it likely the work of a small time private detective working a domestic dispute. The recording of the device could not be used, but it would allow the detective to know what was going on, and when to have the wife or spouse knock on the door. (They used to play the tapes to the spouse, but too many times the spouse could not resist the chance to tell the other that they heard it all.  Which then allowed the other to move to eliminate any use of the information, and to start an investigation on the spouse on how they illegally obtained the recording.)

The battery was almost dead, and was taped and rubber banded into place, which showed a really unsophisticated device, more like something spouses would build themselves, or used in small time business disputes, although sometimes the big boys like to use these cheap devices since they are close to impossible to track, could be left in place and, if found, no one could glean much from it. 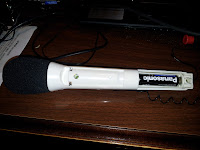 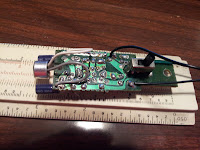 Later I discovered what I believe the device was: a simple toy wireless microphone made in China, sold at Wall-mart store in the toy section under the name Hello Kitty for under $20, sometimes even under $10, powered by two AAA batteries, or 3 volts. These devices can sometimes be boosted by adding more batteries, or, in this case, for longer life by using two D cell batteries instead of the AAA batteries. Not a particularly efficient or effective device, that with out batteries is about 3 inches long, 1 inch wide, and ½ inch thick.  I have seen some less than 1/3 that size and much more effective. Radio Shack sold one for years that was pretty effective and was run by two watch batteries.  People often took these out of their cases and put bigger batteries on them for use.  In my career I have found over twenty of these devices around the world, and perhaps another dozen of these cheap toy devices, of which only two I think where targeted at clients. One book written by a private detective in the Washington DC area claimed that at least one dead device could be found in every hotel room in DC, and often more than one.

Snoops are most often caught when they go to retrieve these devices, so most people just leave them to die. I once asked a hotel manager for a charging cable for my MP3 player.  In the box he provided there were a dozen chargers of all types, a few batter operated tooth brushes, one vibrator, and three rf transmitters, all turned in by the cleaning crews.  I am not sure what the hotel thought the rf transmitters were, but I once found a device used to try and convert pay tv signals to a DVD writer, which looked a lot like the RF transmitters.  As the manager said, they see all type of things and really do not pay attention to them.

I have in a few investigations tried to get local police involved, but most of the time this proved fruitless; most had no idea what charge could be made, and suggested I get an attorney involved. In a case where the police did get involved, they wanted to know what my client could have been talking about that was so valuable. End of that case (see below).

In the government we knew how to handle these devices for both evidential purposes as well as political purposes. The devices were often expensive enough that we had a pretty good idea who made them, and if we waited long enough the snoops would come back and get the device. Most US government devices have serial numbers or a government property tag on them. When you go to court you had to be able to track the devices used, and when an agency is investigated they often have to be able to account for all the devices they have bought.

Finding them is often just a matter of looking for them visually, in fact the US Marines escort cleaning crews at our embassies around the world and find quite a few of them by simply staying alert and making visual assessments. I have taught a number of classes to guards overseeing construction of new embassies, and visually assessing the proceedings is crucial. I believe that if corporate security would provide the most minimal training to their guard forces, they would find more of these devices before they could do a lot of damage. I have taught executives of many of the top Fortune 500 companies on how to use a basic RF signal detector, and how to do a quick visual search of their hotels rooms; in many foreign countries the governments help their corporations by conducting espionage on visiting corporate executives. 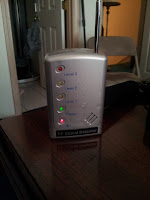 A RF signal detector costs like this one cost around $100   , and I tend to carry one with me on all travel.  They are about 70% effective in finding RF Devices, but I have taught Executives for companies all over the world to use them, and how to do quick physical inspections of their hotel or conference rooms.  RF transmitters are only one way to get information from a hotel room.  Often industrial spies use the room next door, and use high efficiency contact microphones with amplifiers, taped to the wall. In some cases a private detective removes a electrical wall outlet or cable TV cover to gain access to the actual wall of the next room, sometimes even using a small tube to push into the other room for clearer audio.

Still, an RF audio device allows the bad guy to be a room or even a floor away, and get clear audio.  Gaining access is never too difficult: a quick story that you left something in a room, or that you want to take a picture and your room does not have the right view are common tricks.  There are too many other ways to gain quick access to cover here.

I have seen baby monitors used, cheap children’s walkie-talkies used as well as sophisticated transmitters.  It used to be that if you had a layover at either of the German Airports, you could go to the airport electronics store and buy some very well built devices, hidden in everything from ash trays to calculators.  They even had a TV remote with a device in it that could be used on most TV’s.  If you were going through Japan, you could always pick up the infamous Tarantula bug, sold at most discount electronics stores.  The nice thing is that the Japanese FM band is slightly larger that the US FM band, so you could buy a cheap Japanese transistor radio, and use the part of the band that the US radios cannot hear, and have a really good listening device. There were so many of these Japanese devices sold, I used to carry a picture of them to help hotel staff and executives keep an eye out for them.

Most of the time it is such an iffy subject whether a device is used for bugging or another purpose, arrests are difficult and prosecution is near impossible.  I have seen wireless mics used by bands and TV crews being used as bugs more and more.  They are good quality, and if found are usually explained away as a lost or dropped mic.  When I have found them, we find the listening station usually fairly close. We get what finger prints we can off the device, as well as the battery and tape used to hold the device in some way.  I have never seen a prosecution, and seldom had a client ask for a legal investigation. Usually part of the defense is what was the value of information, which means the victim has to divulge the info, not what most clients want.


These devices are out there, and are for some reason on the rise in both domestic and business disputes. Please keep an eye open for them, and if you have a RF detector use it.