Using google earth a trash can was found in the area of where the actual first bombing occurred, this is not to say it was the one, if the reports of the bomb being in a trash can are true.  But for future mitigation, lets look at this one. 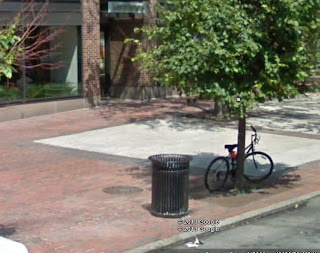 If you look at the makeup this trash can you can see that under the right conditions the can could provide a lot of flying metal shrapnel, not of the type reported though, these would be larger metal pieces like the width of one of the metal staves that make it up.  It is possible that some rivets and other small pieces would also be included, but I do not think nails or other ball bearing type objects would be sent flying.  In fact if this turns out to be a low explosion we would have seen most of this type of trash been still somewhat intact.  Even it nails or ball bearings had been in the bomb, the trash can make up would have sent most of them upwards into the air, not sideways into the people.
On the other hand if a high explosive had been used a lot of the trash can would have gone away at a rapid speed, and we should have seen chunks of the metal staves in people, even in cars and buildings in the area.  Which would lead to this not being the trash can type used or the device was not in this trash can.
When we have trash cans in areas where bombers may be attracted to, we tend to use ones that have limited openings at the top to reduce the size of the objects that can be thrown in them.  If there is a true threat we would either get rid of the trash cans in the area, or invest in one's that are blast resistant.  By this I mean that tend not to fragment easily, and tend to vent blast pressure upwards, to include fragmentation.  These trash cans are quite expensive, many airport use them, but even there the cost is rather prohibitive for normal use.
Limiting the size of objects than can easily be put in the trash can is the better bet, and getting rid of trash cans from areas that attract bombers is even better.
Posted by Rich Roth at 10:24 AM