Palestine Rocket Attacks, limited effectiveness, but do what they are made for, they cause terror to Israel

First this graphic was provided by Stratfor, but it does represent the best description of the threat Palestine rockets are to Israel.   At this point only 15 large rockets have been fired,  But lots of the smaller built in Gaza rockets.  I personally have never seen the larger rockets fired, but Stratfor has posted some of the specifications of them.  They can handle a payload of around 200 pounds, which would or could do a lot of damage.  Stratfor reports Palestine sometimes fires them with out a payload, to get distance and thus increase the scare and terror factor. 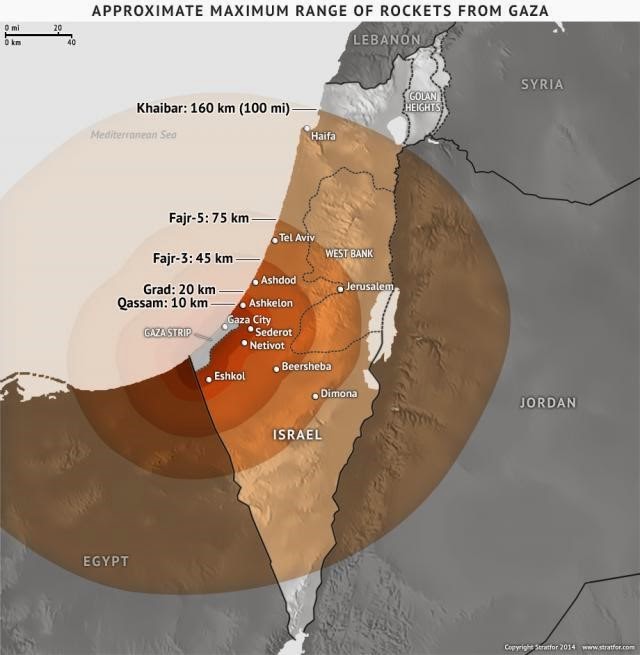 I have been around the smaller rockets, which have a limited range, most barely make it out of Gaza if they do.  But they have made it to a good sized city to the north of Gaza along the sea.  There are a number of smaller cities, ones that where started as settlements many years ago.that are also in range.  When Gaza was occupied by Israel settlers, the rockets where the most effective. It usually carries less than 5 pounds of explosive, and the detonators are a bit iffy.  I have been driving along the outside of Gaza, which is mainly farm land on both sides.  These rockets are very visible and somewhat loud. So you can see them coming for the most part.  I have seen them land in fields being cultivated, and the children would stop with everyone else and listen and if possible watch them fly thru the air.  When they land in fields children will often run up to them, which is very dangerous due to the iffy detonators.

They are dangerous, and very scary for the children at times, but are not all that effective in anything more than a chance hit of a building.  People playing outside are in the most danger, and makeshift shelters are around most outside play areas like parks and playgrounds.  At night they are a cause for fear since they are harder to see, but people do hear them.

I am not sure if the Iron dome is used that much against the smaller rockets, but they are used against the larger ones.  They are large enough that if Israel makes a ground assault, they will probably find most of them. Knowing the Israel intel capabilities, I would not have a hard time believing they pretty much know where most if not all of them are.

When you study the graphic, please remember the thousands number often reported are the smaller rockets, and you need to look at the smaller foot print to see what they can hit.

The smaller rockets are often shot off stands made of re bar, and are fired in multiples.  One that just missed me as I was driving in Gaza, apparently with the third of three, and one of the first two,when going off knocked the stand over so it was skimming over the ground and over the hood of our car. ,

On the other side of the issue, you learn to know what an attack team of Helo's or fighter jets look and sound like.  You make turns as soon as you see or hear them coming, I have been near two cars blowing up by attacks, and have seen quite a few more.  Israel also tend to blow up roads at times, which made driving to work for me a bit of a challenge at times.. .

The great hope and my prayers is all the violence stops as soon as possible.  The number of actual active terrorists in Gaza is quite small, but there is a lot of inactive support, but even that number is pretty small.  Still Hamas runs Gaza now, I still worked there for a while after they gained control, but was limited to areas not under direct control of Hamas.  They are a threat to Israel, and can go active at anytime. They must be stopped, either by the vote or attacks, it may even take both.
Posted by Rich Roth at 11:43 PM