Danger Signals can bypass normal Brain Processing and often do,

This article deals with an actual incident in Washington DC and the reactions to an attack. It deals with sensory signals bypassing much of the cognitive areas of the brain and going  on directly to action.  Back in 1949 an Army Psychiatrist later turned Philosopher (that is what science does to theory they can not find a way to measure) Mr. Eric Berne wrote an article called The Nature Of Intuition,  still referenced by Military writers, it seems to have been regulated to the scrap heap by Modern Psychiatrists.  Graphically represented now days like this, from the referenced article. 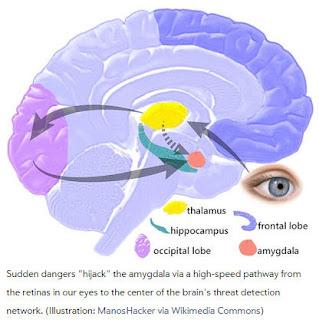 Basically saying intuition can often bypass words and go directly to true knowledge, depicted now days by the above graphics, as sudden danger signals bypass the word processing parts of the brain and go to as Berne describes as True Knowledge and results, if listened to, as acts.

Science is still struggling with intuition, and many management dissertations take stabs at the subject.  But what is important to Security Practitioners trying to save lives, often their own, is even though we have a hard time defining or describing intuition, it is a key part to our Security Awareness.  We need to strive to use this signal processing, or True Knowledge with out completely understanding it, all the time.

To get a warrant for a search or arrest, we as security practitioners need to put things into words.  A good bit of my time is trying to pass on how to use danger signals, that seem to float with out a verbal tag.  I will always continue to do so, but I have also come to recognize that the intuition that allows a good Policeman to become a great Policeman, may never be completely defined.   This is true of other endeavors than just security, a good business manager and a great business manager seem to be marked by this Intuition or  True Knowledge issue as well.  About five Directors ago at the CIA, he tried to explain the problem, as biases, which plays a big part of it I think, but could never seem to crack the intuition issue, but was clever enough to know he did not have it all yet.

So we need to strive to learn that little pin prick, of a danger signal and better use it, but we also need to understand some people just seem to naturally be good users of it.   I like many of you reading this will continue to teach people how to use it better, and give little short cuts to help people, but we have a lot to learn yet ourselves.
Posted by Rich Roth at 10:19 AM