Hospital Gear Could Save Your Life Or Hack Your Identity, or worse kill you

One of the dirty little secrets of Hospitals it that they have employed more Serial Killers than any other industry.  Doctors, Nurses, radiologist lab technicians, the list goes on.  Angels of Death as the Nurse version of Serial Killers is called, have been found in every country of the world, as well as virtually every State in the US.  Here is some bad new, the same Angel of Death in one case worked in four States, suspected, but just moved on.  No Hospital wanted the negative publicity nor liability law suites.  Doctors have done the same thing, by the way for Doctors, a disturbingly large number of them end up working at one time or another at VA Hospitals or Clinics to let the suspicions die down as they leave one hospital to another, but they kill at the VA Hospitals as well, they just do not seem to get caught there. 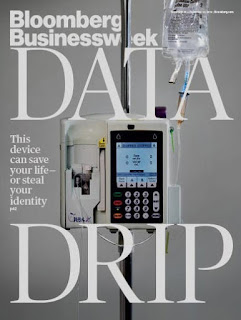 This article is focused on what is becoming a real problem at Hospitals, Data theft, but the same hackers can invade the software of virtually any device hooked up to the Hospital Data Network, which is becoming all of them, and set commands that will make you sick, or even kill you.  Sort of the Doctor Death, or Angel of Death serial killers on steroids.   Executive Protection Agents, when your client goes in the the Hospital, you may need to get a wavier of responsibility, because you probably would never know if the attacker got in via the Hospital Computer Network.

I am not sure what the Hospitals are going to do, I would recommend any family that had a member die when it looks like they should not have at a Hospital to demand an audit of the Equipment hooked up to the victim, to see if it was compromised.   It was hard to find the Doctor Deaths and Angel of Deaths in the past, now a new generation of serial killer maybe among us, that we know nothing about.
Posted by Rich Roth at 8:43 AM