How could a bomb be placed on the Air Bus 320 at the Egyptian Airport, lets look

First, the plane and Air Bus 320 one of the work horses of the worlds aviation fleet. Used all over the world by many airlines.  Good plane.

It is very preliminary, but what is leaking now, right or wrong is the bomb (if there was one) was planted somewhere between the lower blue paint on where the tail hits the belly of the plane, and the back of the wing.  There is both cargo space back there, as well as areas that are used for electronics and flight controls.  This is important if a bomb was placed by a ground handler from the ground crew of the Airline or the Airport.  Airlines are not usually really happy about Airport people playing with their aircraft. On the other hand many ground crews in these airports are contracted by airlines not airport employees.

So as we know many fundamentalist Islamic followers work at the airport, actually all over the country.  There are many that are or where members of the Muslim Brotherhood, as are military men, policemen, the cobbler the baker and candle stick makers, still a going profession in this area.  The evolution from Muslim Brotherhood to ISIS is not very far.  Still I am hearing by the hour of how corrupt the airport workers there are, this is not hard to believe,  most people make a few dollars a day for their labor.  Corruption is a survival tool that is nation wide.

The path into the airport by passengers is by the terminal with both checked bags and carry on bags going through some level of screening,   Unless of course someone has been bribed, then it could bypass screening.  That of course could happen in any country to include the US, in fact look at the TSA screeners charged over the years, and you can see how it could happen.  Now our background checks are quite a bit better than those in Egypt, but still bad things happen.

Paths to the plane by maintenance workers, baggage handlers, fuel handlers, are thru different means, some go thru screening like the passengers, others though vehicle gates around the airport, others thru maintenance buildings located in and around the terminal of the airport. It is not a big airport, but a fairly busy one.

Here is the whole airport, with gates all over the place.  If you look on the lower center, those facilities also have access via gates to the airport. 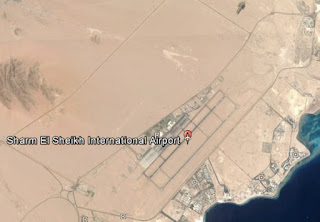 The next picture shows the terminal areas of the airport, there are two main terminals now, with a third on the way, the rest of the buildings are support facilities, like cargo, maintenance, and Administration.  Notice also that most planes are boarded away from the terminal, via bussess and such. 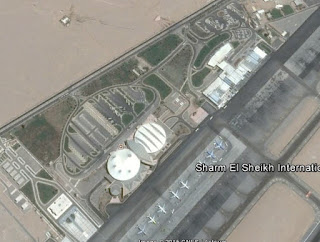 It looks pretty nice and in this picture calm, but normally the airport is a buzz with traffic vehicles of all types, as well as a lot of people walking around.

If you are authorized to be on the airport, or in a country like this one, are high enough up in the Government, you can make your way to many of the planes.   If a person accessed the plane with a bomb, which could be anything from 11 ounces like the bomb that brought down the Pan Am Plane over Lockerby Scotland,   Or it could be much larger, say 20 pounds or so.  I would worry about it being that big, it would have had to have left quite a bit of residue, that should have shown up by now.   Since it did not have to go through screening it could have been placed strategically to cause maximum damage.   In which case a 5 pound bomb could get the job done.

Getting a big device through screening would be very tough, not impossible with insider help.

I have discussed the screening differences in other posts on this blog, but this is looking at the insider threat.

Yes, we do have insider threats here in the US, yes we do have Islamic workers in our airports, flying our planes and working as security and police.  Most if not all pose no threat.  But we have had extremists working at our airports as well, but still they would have to be very careful to keep others from noticing them.

Now Egypt, the ruling party a few years ago was the Muslim Brotherhood so they had people in all levels and parts of the Government.  Many when the Muslim Brotherhood was kicked out submerged into the mainstream of the country, but has always had, and still have a very angry feeling toward the Egyptian Government.  These folks are many, and are at every airport in Egypt, as well as in the Military, so getting explosives is not a real problem, as Police so getting onto the airport is not a problem.  As a maintenance engineer, they would know just where to place a bomb.

The bad news is the first thoughts of a shoot down also could have happen.  Many soldiers in the Military are closet Muslim Brotherhood members, in fact whole crews of surface to air weapons systems, may well be.   So it could have happen that way as well, there are surface to air systems all around the Sinai to protect the country.   Just so you can not sleep well tonight this is a fear our military leaders have as well, they also know we have groups of Islamic soldiers that band together, and .....  But that would never happen.
Posted by Rich Roth at 6:55 PM