Victimization has been studied for many years, The Routine Activity Approach is one studied a lot.

In this approach studies made of crime made the finding that crime needs the following parts to exist.

One of the key parts in this approach is the Victim, so this approach does not get a lot of respect from many circles. It is not politically correct to ever put the victim as having any responsibility for crimes they are involved with. 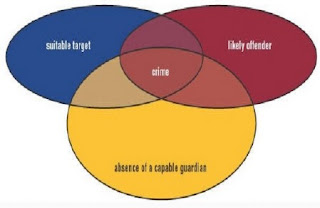 But from the start we need to make ourselves not the Suitable Target, part of doing this, is to do as much as we can to not be in the presence of a likely offender.  If we are around a likely offender, then we want to have people that can be our guardians, this can be friends, or anyone that would be a witness to the likely offender, and raise an alarm.

Likely offenders tend to show up a lot, like late at night, in areas with out a lot of capable guardians, friends others that have our back.  So say at a bar parking lot late at night, we need to have friends around that are watching out for us. 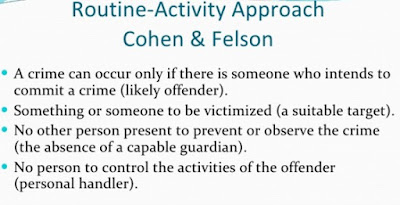 . Cohen & Felson developed the approach after studying a lot of crime around the country.  It is controversial, but based in fact.  The other part to the Guardian approach is for the world to provide someone to control the likely offender.  Police,or at times handlers for high profile likely offenders.  The problem is the Police are not around all the time, and or the handlers are paid by the likely offender at times.  Having friends and other witnesses around is usually a better approach.
Posted by Rich Roth at 5:55 PM